Rev. William Reul (b. May 1857) was born in Germany and immigrated to the United States of America aboard the Elbe, departing from the Bremen and Southampton port September 24, 1890.  He was thirty-three years old.  That same year he accepted a call to serve the German Lutheran Evangelical Trinity Church in Loyal, Wisconsin and served the newly formed Friedens Gemeinde Congregation located in rural Unity Township.

A new church, 32' x 60' was built next in Loyal and dedicated on July 23, 1893. A horse shed was built next to it..  In 1903, prior to Rev. W. Lange being called to the church, Rev. Reul organized the first Ladies' Aid Society before taking a call in Almond, Portage County, Wisconsin. 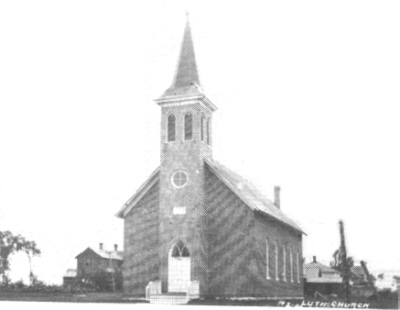 The first Trinity Lutheran Church in the Village of Loyal, Wisconsin