Lynn, Clark County, Wis. - The first Ukrainian Eastern Orthodox Church in this vicinity has opened in a former cheese factory, where eight area families of Ukrainian descent have cooperated generously to convert the interior of the old building into religious architecture typical of the Byzantine.

The archbishop, who is the first assistant to the Greek Orthodox Church leader in America, has named the Rev. Nicholas Yarmolovich of St. Paul the interim pastor. A resident pastor will be appointed later in the year.

Christmas on the calendar of the Greek Orthodox Church was observed during the period Jan. 6 to 8, when the Rev. Yarmolovich arrived her to conduct the religious services in the church.

The church New Year services being today and continue through Jan. 15, on which day the interim pastor will again be in the community to celebrate religious rites in the local church. Services also will be held the first and third Sundays of each month in the interim, and on special church days. Members of the parish are looking forward to a special observance of Trinity Sunday in June, at which time the archbishop is expected to return and participate in the ceremonies.

More than $3,000 was spent on remodeling the building in which the church is house. The building will accommodate about 100 persons. At present there are 20 men, 18 women and 12 children who make up the active membership. There also are several families in the Pittsville, Riplinger, Chili and other areas who contribute financially to the church and attend services when possible.

The church will officially receive its charter in spring, at which time all members of the church will be designated "charter members."

Inside the building, there is the usual arrangement of Ukrainian Greek Orthodox churches, divided by arcades with an apse for the altar, which can be enclosed by a screen. Decorations throughout the church share the influences called Byzantine. Exquisite examples of Ukrainian needlework, the handicraft of women of the parish, are draped about religious pictures.

Outstanding donations of church good include a set of vestments by Mr. And Mrs. Justyna Lopushok; chalices by Sawka Nos; an ornate altar Bible by Makap Choroez, and various altar fittings by Majk Krochmal and Walter Shumski. 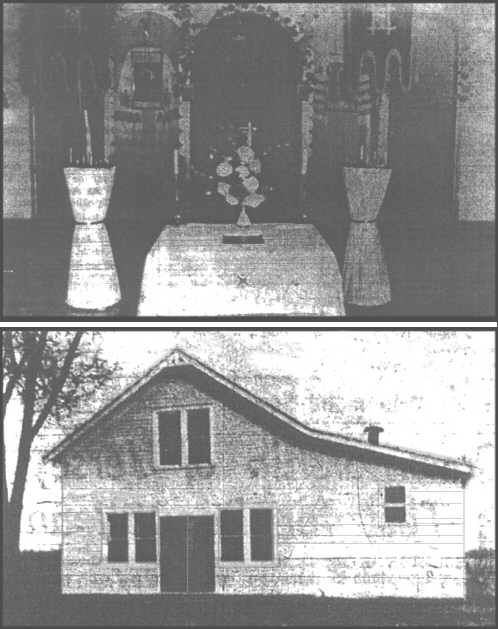