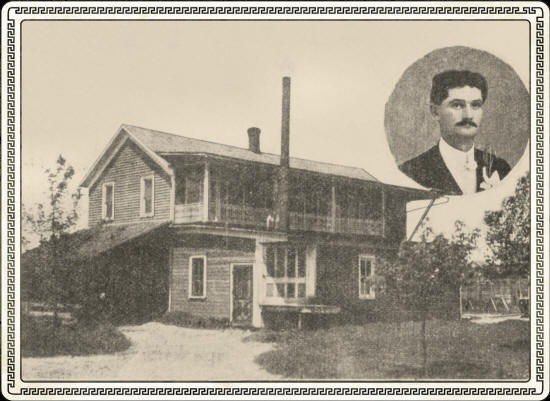 The Home of Colby Cheese in Colby, Clark Co., Wisconsin

History of World Famous "Colby Cheese" - There are few places where people haven't heard of Colby Cheese. The palatable dairy product was developed 82 years ago by Joseph Steinwand. The Steinwand Cheese Factory, located one mile south and one mile west of downtown Colby, Wisconsin, was christened the week of May 1, 1882. By June 21, 1882, the Steinwand Cheese Factory was in full operation, producing cheese at the rate of 125 pounds per day. Cheese factories, in those days, operated only from May to November shutting down during the harsh Wisconsin winters Milk was hauled into the cheese factory on stone boats drawn by oxen. As early as 1884, the Steinwand quality cheese was having its economic effect upon the milk producers in the area. They were increasing their dairy herds. By 1884, it became clear that this was a cheese-making area. At this time, there were three cheese factories in the immediate area owned by Ambrose Steinwand, Herman Laabs, and Frank Brett. By the time Joe (son of Ambrose Steinwand) was 16 years old, he was an accomplished cheese maker.

Colby Cheese varies from chedder in that after the first cutting of the curd, the whey is drained off, and the curd is washed and cooled with cold water. It is then salted, mixed and pressed into metal forms, thus giving it a higher moisture content than chedder cheese.

One of the interesting references to the origin of Colby Cheese is August, 1898. A merchant at Phillips, Wisconsin, gave as one of his reasons, people should trade with him, was that he sold the genuine Steinwand Colby Cheese. By the turn of the century, this part of the country was destined to become the top cheese producing area of the world. Today, cheese production has become the backbone of Wisconsin's Dairyland. American cheese, of which Colby is one, amounts to 45% of the U.S. production. Many more varieties of cheese produced in Wisconsin raises Wisconsin's contribution to the nation's cheese output to the 50% mark. Today, on the original site, where Colby Cheese was born 82 years ago, stands a new cheese factory built by Lawrence Hoernke, a Clark County cheese maker. The new enterprise is equipped to handle 100,000 pounds of milk daily, and has a daily cheese making capacity of 10,000 pounds and goes under the name "Colby Cheese Factory". This year, in conjunction will the annual Colby Cheese Days, (3rd week end in July) the Lion's Club of Colby has made the world's largest Colby Cheese. This cheese was made by the "Welcome Dairy" owned by James Eggebrecht, who is also president of the Central Wisconsin Cheese Makers Association. Jim's cheese factory is located 2 miles east of the north city limits of Colby.

Nutritionists consider cheese one of the basic seven foods.