Some four years ago, a trip to Greenwood (Clark Co., Wis.), then known as "Honeywell's," was regarded as a tedious journey, and was only undertaken in cases of business necessity, and was successfully accomplished only by those who took the precaution previous to their start to fully assure themselves that vehicle, harness and beast were in a condition to warrant a twelve hour pilgrimage over one of the roughest roads to be found in Northwestern Wisconsin; but today the smooth, hard beaten turnpike extending the entire distance and for several miles still further northward, affords the pleasure seekers a most excellent track whereon to enjoy a few hour's drive, and the round trip can easily be made in the "cool of the evening."

Having recently made one of these trips, and being impressed with the great advancement made in the development of our "up river" country, we could not refrain from making a note of some of the most prominent of the many improvements, and with your approval commenced them through the columns of your paper.

At Greenwood there seems to have centered a class of businessmen, who but recently formed the nucleus around which is, steadily and surely growing a prosperous village, having for the guarantee of its future welfare, the united efforts of its citizens. A large tract of country, seemingly exhaustless in its wealth of both farming and timbered lands, lies contiguous to Greenwood, and for years will pay tribute to the town's business and commerce. 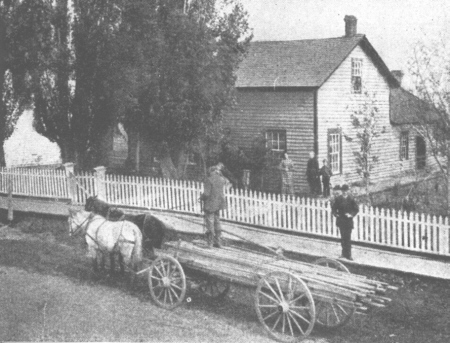 
Here we rested our steeds for a moment and interviewed our friend, Mr. William H. Begley, at whose well appointed, large and commodious hotel, the sojourner finds rest and refreshments sufficient to meet his wants, be he ever so fastidious. Begley has divined the necessity of removing from his hotel the liquor traffic, for which purpose he has already commenced the construction of a building on the adjoining lot, the dimensions of which are to be 24x50 feet. The second story of this building will be fitted up as a hall for the accommodation of the public. Mr. B. has also recently added much room to the hotel to meet the requirements of increasing patronage. The pioneer mercantile establishments of the village, Messrs. Chandler and Brown, and Steven C. Honeywell & Son, are doing a prosperous business, and from the completeness of their respective stocks of general merchandise, we should judge were well prepared to cater to the wants of their increasing trade.