The Second Period of Lumbering in Clark County, WI 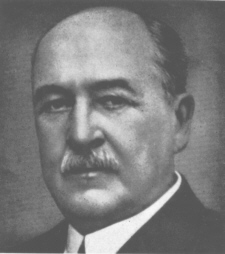 For Whom the City of Owen Was Named

Just as the days of the old Wild West were prolonged by the activities of the famous Tombstone, Arizona, so the days of lumber were prolonged in Clark county by the activities centering at Owen. It was in 1893 when John S. Owen became a factor in Clark county, and that was almost exactly half a century after the lumber industry had begun in the southern part of the county. By the Nineties the cutting in the south had been almost completed. The big drives had come to an end. The Black River Improvement c o m p a n y war; fading away, with no reason for its further service. Its manager, Joseph Nesbitt, with hearing dulled, was approaching the final roundup. The works of which he was master, the Hemlock dam and Dell's Dam, were awaiting the flood of 1914, which would put the finishing touches upon an era that was ended. The river, once the great artery of commerce and business, had dwindled in importance, as the Owens, spreading their operations from Owen as a center, laid rails and provided rolling stock to bring in nearly all of their logs by an overland haul.

On a Big Scale

The records show that John S. Owen entered Clark county in a big way, with 30,000 acres purchased within Clark county and beyond, especially to the north. The operations covered 400 or 500 s q u a r e miles, stretching mainly to the northwest. The logging and milling were carried on largely, with the count in millions of feet, both of logs and of lumber. Immense piles of lumber, with open aisles between, were always drying out by nature's method, and were going out in car lots to the trade. The Owens, more than the lumbermen of earlier years, had their eye on the future. They were thinking of what would happen after the trees had been taken away.

The Old Trestle at Owen

This trestle carried the Owen log trains over the Soo line tracks. It was erected to avoid a crossing at grade. The trestle was constructed in the early years of Owen. It is not remembered by Earle Kidd, who joined the Owen organization shortly after the turn of the century. The engine on the trestle was the property of the Owen company, which had ample rolling stock to care for its large operation.

So they endeavored to promote farming progressively, as they cut, selling on easy terms to those who gave promise of permanence. They encouraged the development of their city upon a permanent basis. John S. Owen, dying in 1939 at the age of ninety, had witnessed the transition and had helped in it. His son, A. R. Owen, spent his later years very largely in turning to permanent use the acreage which had been cut over. As the lumbering activities began to slow, the Owens spread into the retail field, forming the O&N Lumber company, with associates, in 1915.

The Owens were always successful in their operations in Clark county. When A. R. Owen died, he left an estate approximating half a million. The family had taken losses, notably in western timber holdings, but they were wise business men and did not permit sour situations to develop. In later years they lumbered in the south, but even there the cutting has long since been over and the problem has been to pass the land along into the permanent use of agriculture.

Employees of the Owen Lumber Company