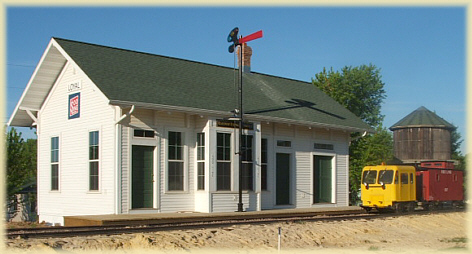 A Chronicle of the

In late summer 2004, Dorothy & Francis Voit and Joan & Milton Knack had been discussing the possibility of starting an historical museum in a storefront on Main Street in Loyal.  To gather information and get ideas, they visited a few area historical museums with intentions to visit more, when they learned that a replica of the Loyal Depot built by Irban Aumann, was being offered to the City of Loyal.  As time went on it became known that the City was not willing to accept the gift and it was suggested by a Council member that if the yet unformed historical group would be willing to accept the gift, the City would provide money for relocating the depot replica on a site yet unknown.

It was a great opportunity to start the museum, and following a few meetings of an interested core group, it was agreed to proceed to organize the Loyal Historical Society and to consider the purchase of a triple lot at 501 E. Elm Drive in Loyal.

On October 4, 2004 a group of people met with Tom Duell at the site to discuss preparation of the site and moving the depot.  The existing building was examined and it was determined that the shed addition on the building could be removed and we would keep the original structure until money was available for whatever we would decide to do with it.  The restrooms are not handicap accessible but are legal until we replace them.  It was also decided that we should get easements if possible from the rear adjoining property.  Following that we met with an attorney who advised us to file for incorporation and tax exempt status.  A donor made the down-payment on the lots and we were ready to organize.

The organizational and first annual meeting was held on October 21, 2004 at Loyal City Hall.  Membership dues for 24 charter members were collected.  Charter members will be accepted during the first year of operation.  Officers: President - Dorothy Voit; Vice-President - Irban Aumann; Secretary-Treasurer - Joan Knack.  Board of directors were appointed for varying terms of one to three years.  Two new directors will be elected in October 2005 for 3-year terms and each year thereafter directors will be elected for 3-year terms.  The first Board of Directors are: Dorothy Voit, Irban Auman, Joan Knack for 3 year terms; Vernon “Bud” Smith, Robert Langfeldt for 2 year terms; Diane Anderegg, Rick Mews for 1 year term.  The closing on the land purchase was completed on October 29.

Over the next few months, several meetings were held with our legal counsel.  Many, many required forms were completed, donations accepted, and a few bills paid.  At the end of 2004 we had received $7,230 in donations and had paid out $1,825 which included $500 down payment on lot, $500 to the IRS for a user fee determination, $440 for insurance, $35 for Articles of Incorporation, and the remainder for work done and supplies purchased.  We had 28 members.

Early in 2005 we met with Mick Braun to discuss the moving project; he estimated the total cost would be $15,500 or less.  He reported that the Cox family graciously allowed him to move the depot over their fields, and that several sub-contractors donated part of their services, and his company also would donate a considerable amount.

At this same meeting we discussed fund raising possibilities including a steak feed, a ball tournament, something during Farm Technology Days, a flea market, an auction.  We also agreed by motion that all purchases and expenses must be brought to the Board of Directors for approval before the purchase is made or expense incurred.  This motion does not include normal expenses such as utilities, office expense, or other required payements.  It was also reported that we have applied for grants from Listeman, Weathershield, and Mid-State Bank.

Our first fund raiser – a steak feed at the Loyal American Legion Hall on April 30 was a huge success.    Modern Woodmen of America  provided matching funds of $2500.  We held a silent auction, a spinning wheel for prizes, provided music for dancing, and accepted donations and memberships.  In addition to Modern Woodmen, the Loyal Lions and the Loyal Legion made substantial donations to our cause and many local and outside communities and individuals also provided funds for the silent auctions.

We wrote for several grants during the spring,  but only one has responded with funds – Weathershield Lite Foundation provided $250 to help us start our family history project.

During the first months of 2005, a lot of activity occurred on our lot at 501 E. Elm Drive.  Foundations were prepared, then the structures (depot museum, water tower) were moved onto the foundations; the tracks were put in place, the chimney was  restored, a wooden platform was reconstructed.  Miller Plumbing replaced all the fixtures in one of the restrooms and did necessary plumbing.  Bob Langfeldt provided a lot of electrical work for us in getting established.

During June we acquired two quilts that originated in Loyal in 1895 and the other in 1893.  The first was brought to us from Flint, Michigan by Melissa Aseltine who is a descendant of Ebenezer Borden one of the first settlers in Loyal.  The other was donated by Dianna Schuette who has had the quilt in her family for some time.  We are presently researching the history of the quilt and will update this paragraph when more information is known.

Also during June, Bud and Joan Smith purchased the gas station replica at Irban’s auction, and then donated it to the historical society.  It is complete with two gas pumps, and  the station has been moved to our museum lot.  With these two buildings – the museum and the gas station, we should have a very nice setting as visitors approach the city from the east.

Our goals are to make Loyal a better place to visit and to live, and to preserve as much history of the city and surrounding area as we can.  Since this should be the goal of all the citizens of Loyal, I would hope we can all work together to make this happen.

*** This copyrighted Clark Co., Wis. genealogy and history material is used on this nonprofit site with permission and may not be copied and posted on any commercial genealogy sites such as Family Tree Maker or the merged companies Ancestry/RootsWeb/MyFamily.

This is a Clark County, WI Internet Library Project

Every submission is protected by the Digital Millennium Copyright Act of 1998.