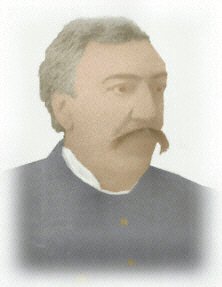 Thomas Jefferson LaFlesh was born June 3, 1836, in Leamington, Ontario, Canada, of French and Canadian parentage. His parents were Pierre LaFleiche and Elizabeth nee Elliot. It is believed that Tom LaFlesh's first stay in Clark County, WI, occurred in about 1850, when as a teenager he assisted Amos Elliott with logging interests north of Neillsville. What Tom saw in the towering white pines along the banks of the Black River as a young man left a lasting impression on him, one that made him want to return and share in the beauty of the land and wealth of the timber as well.

The Civil War took Tom away for a time. In December of 1861, in La Crosse County, Company B of the 2nd Wisconsin Cavalry was created. The unit was mustered into service at Camp Washburn, near Milwaukee, Wisconsin, on February 6, 1862, with a roster of 100 members. Thomas J. LaFlesh was named at the onset of the unit as Second Lieutenant. On March 24th the Company, with the Regiment, left Wisconsin and had four years of active participation in the war. The 2nd Cavalry had took part in the battle at Vicksburg, Miss, among others. When Tom LaFlesh was mustered out in November of 1865, he had worked his way up to Captain of Company B. The "1918 History of Clark County" book tells of Captain Thomas LaFlesh, along with other veteran officers, leading the Civil War Reunion parade on their steeds in the city of Neillsville, Wisconsin. These reunions became popular for the different regiments in the state and were held annually in the fall for many years after the war's end. LaFlesh participated and was an organizer and speaker at several of these reunions. In 1871 he obtained permission for "Old Abe", the war eagle, to attend the Neillsville Soldier's Reunion.

During LaFlesh's war service, he took time out to marry Elizabeth Summerside, daughter of George and Mary Summerside, on August 27, 1863 at Black Earth, Wisconsin. The first land entry for Tom purchasing acreage in Sherwood Township, Clark County, Wisconsin was in 1869. At that time he is believed to have moved from Necedah, Wisconsin, with his wife and two small children, Mary and William, to the Sherwood area. Here his logging operations began with the assistance of General Cadwallader Washburn (lumberman, huge landowner, Wisconsin Congressman from 1869-1871, and governor of Wisconsin from 1872-1874). At it's peak the Washburn land holdings covered some 15 to 20 thousand acres of valuable timberland located by Captain LaFlesh in central Wisconsin, along with land in other areas.  Washburn organized Company B of the 2nd Wisconsin Cavalry at the onset of the Civil War and apparently took a liking to LaFlesh.

During the 1870's and 1880's LaFlesh was extensively engaged in the logging business and kept his associations with C. C. Washburn. By a special act of the state legislature, Tom was authorized to construct and maintain dams on the East Fork of the Black River in Clark, Jackson, and Wood Counties beginning June 1, 1880, for a period of ten years. Among these was the logging dam in Section 14 of Sherwood Township. In 1883, he was in charge of building a dam three miles north of Scranton (just east of City Point) on the East Fork of the Black River. In January of 1884, he was in charge of five logging camps on the East Fork and foresaw the best winters logging ever, expecting to put in 15,000,000 feet of logs.

In 1889, Thomas LaFlesh left central Wisconsin and moved to California with his family. Here he pursued mining and road engineering. He died later in Portland, Oregon.

In 1905, at a reunion held for survivors of the Wisconsin Second Cavalry in LaCrosse, a letter was read to the attendants from Capt. LaFlesh. He was unable to attend from California because of his declining health. Here is an excerpt from this letter in Tom's own words. "I hope you may reap a rich harvest of enjoyment at this meeting. I had hoped to be with you at this time, but my health would not permit; though I still hope to meet many of you at some future reunion. As I sit in my cabin door on the lonely Sierras, looking to the west, the sun is slowly dipping behind the hills on its way to the broad Pacific. To the east its rays still brighten the high and hoary peaks; then the brightness vanishes from them, too, and soon all will be folded in the robes of silent night. Thus it is my comrades, with the grand old army. Morning and noontide have passed; our star is also dipping behind the western hills as our eventide draws on; its lingering rays still rest upon a few of our hoary heads; they, too, will soon vanish and all will be dark in the silence of the grave, leaving only the records of our words and works for future generations."

**This information is provided by Kay Scholtz for non-profit uses only.

It may not be copied without permission or reposted to commercial sites.