The transfer of the Green Grove Cheese Factory, operated for many years by George Foelsch (and his wife, the former Margaret E. Wolfe), to Standard Brands, Inc. of New York, N.Y., was completed January 27, according to a warranty deed now on file.

Recent changes have been made in the ownership of cheese factories in Clark County.

Standard Brands has also retired from cheese production in this territory.  The Pine Grove factory, Town of Beaver, which was developed by George Foelsch, has been sold by Standard Brands to Pauly & Pauly of Green Bay, a subsidiary of Swift & Co.  The Pine Grove factory is one of the largest of Clark County in cheese production, its output exceeding a million pounds per year.  This concern has also bought the Riplinger factory, long owned by Emil Marten.

The management of the Pine Grove factory will remain for the present with George Foelsch, whose contract runs through this present year.  Mr. Foelsch resides in a pleasant home adjacent to the factory and also owns neighboring farms.

Pine Grove Cheese Factory was located in Section 24 on the SW corner of the intersection of what are now Riplinger Road and Oak Grove Avenue.  George Foelsch was the owner and Glen Bloom hauled milk.  It operated until there was a fire in the early 1960's. 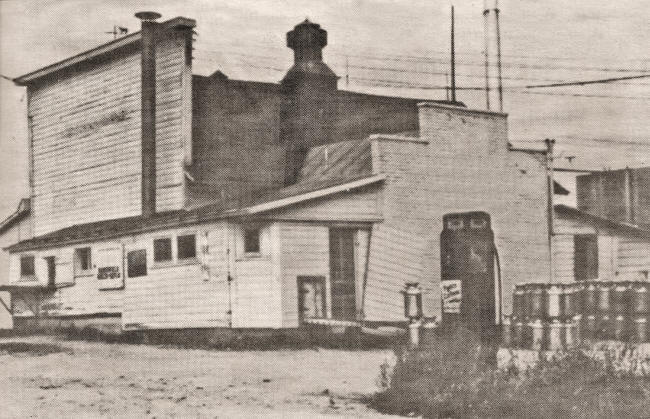 Pine Grove Cheese Factory, located in the Town of Beaver, in the 1940s, was one of the largest producers in

Clark County, its output exceeding a million pounds of cheese per year.